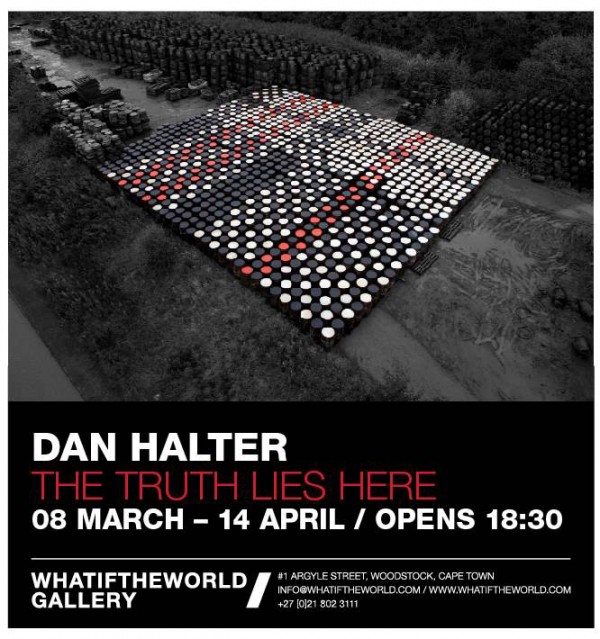 The Truth Lies Here is Dan Halter’s 4th solo exhibition. The show engages with notions of transmigration, the construction of ‘truths’, and the way in which things hold together and fall apart – the integration and disintegration of the fabric of the Zimbabwean Diaspora. 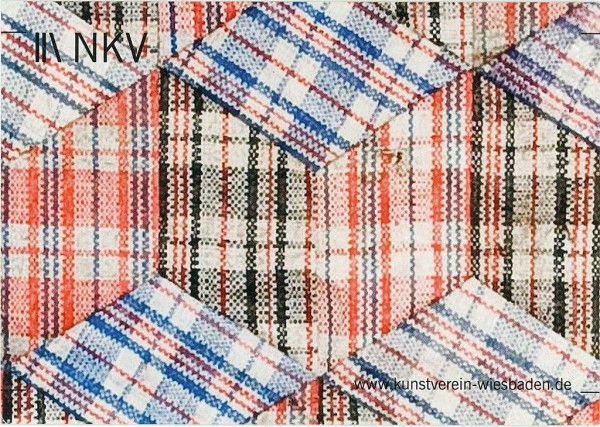 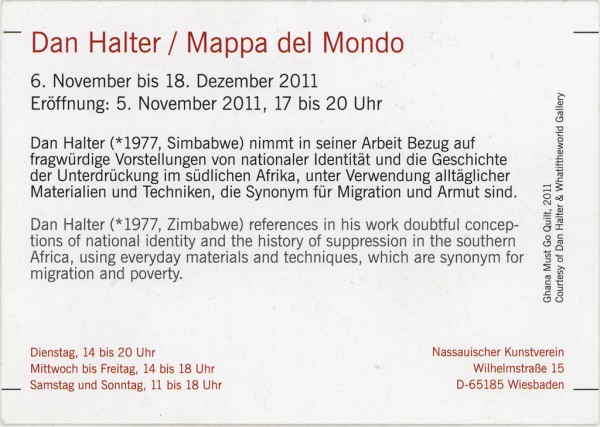 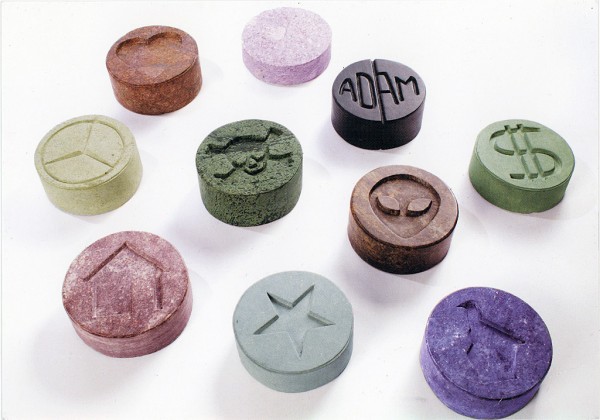 Take Me To Your Leader Flyer Exhibition flyer Front 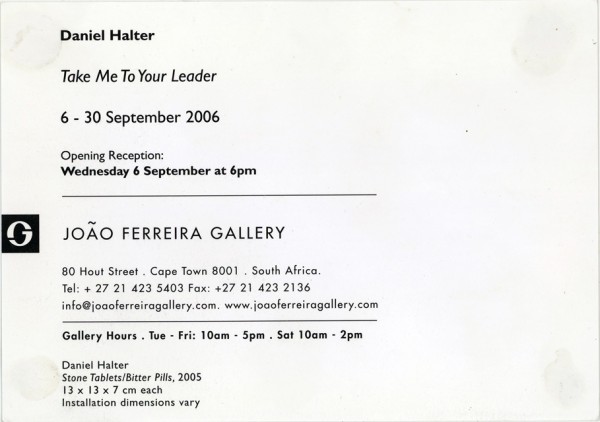 Take Me To Your Leader exhibition flyer

“Take Me To Your Leader includes a technically diverse range of works encompassing video, sculpture, weaving, collage and assemblage. The exhibition has its origins in post-conceptualism, literary cut-ups and games of culture and currency, and the histories of colonial occupation and revolution in Africa…”

Take Me To Your Leader includes a technically diverse range of works encompassing video, sculpture, weaving, collage and assemblage. The exhibition has its origins in post-conceptualism, literary cut-ups and games of culture and currency, and the histories of colonial occupation and revolution in Africa.

Untitled (Zimbabwean Rave Queen) provides a strong orientation from which to access this collection of works. The opening refrains of “Everybody’s Free (to feel good)”, that anthem of early 90’s dance music, are unmistakable. The driving beat and club diva Rozalla’s assurance that “brother and sister, together we’ll make it through” are insistently upbeat, yet somewhat at odds with the accompanying visuals. White kids, the protagonists of 90’s rave culture, dance on flatbed trucks and in open spaces, worshipping the gods of deep bass emanating from giant speaker stacks.

Cut to images of mass protest and uprising, multitudes of people toyi-toying in the streets. The juxtaposition immediately unsettles. It feels dangerous. You ask yourself, “Is this okay? Can you play this sort of sampling game when the import of what each particular scenario represents seems so fundamentally out of synch with each other?” But such is the strategy behind montage’s production of a ‘third’ sense engendered by radical combination.

The heaving bodies pound the ground and raise their arms with similar resolve. Stripped of their ideological disparities, both scenarios speak of desire for an alternative reality. Both harness the psychology of crowds to shift individual sensibilities to mass consciousness. The song’s chorus seems to suggest a political imperative camouflaged in an otherwise bubblegum-dance track.

Like the rave-culture origins of this video piece, the sculptural work Stone Tablets, Bitter Pills sees Halter using traditional Zimbabwean soapstone from various areas within the country to hand carve a set of tablets bearing pop culture icons that make explicit reference to Ecstasy, while their scale reflects that of small landmines. The idea of “a new set of commandments and some bitter truths” also provides the impetus for I don’t know what to believe anymore and Life goes on.

Halter has paired two maps of Zimbabwe, one of farming regions and the other of land classification, with two key literary works of the 20th century, George Orwell’s Animal Farm and Joseph Conrad’s The Heart of Darkness, respectively. The novels are shredded and woven into the respective maps to reveal aphorisms and platitudes (“when days are dark friends are few”) where areas are left unwoven or stitched over.

Halter’s work is characterised by a conceptualism that employs play as a principle device, most literally embodied in a modified game of pool installed in the gallery which capitalises on a perverse ‘foreign exchange’, namely the interchangeability of a Zim 20c piece and South African R2 coin (the standard price for a game on a pay-per-play pool table). The game is cheap and the stakes are high: only two balls are left. Sink white, your opponent gets two shots. Sink black, you win, game over.

Halter’s engagement with play and dark sense of humour is not to make light of complex issues, but rather functions like satire in that it provides a point of access to a truth or reality that is otherwise unspeakable. He asks: “How do you start or suppress a revolution?” With a nod to Kendell Geers’ Terrorist’s Apprentice sculpture (a matchstick cast in gold), Halter has developed font for a revolution/Zimbabwe, two typefaces produced from matchsticks and matchboxes. Using the industry standard sentence used to demonstrate the ‘look and feel’ of a typeface – “the quick brown fox jumps over the lazy dog” – the result is deliberately inflammatory.

Halter states: “I think art does create a consciousness that can cause social/political change. I think art should attack the status quo in as many different ways as possible. I think it should manifest itself wherever possible, on the streets and in buildings. I think this particular body of work was made for a gallery audience – to jolt the intellectuals out of their complacency and to start looking at the future of South Africa with an awareness of what is going on in Zimbabwe and the rest of Africa. In many ways South Africa has to catch up. The wealth distribution here must change; and to ignore Zimbabwe as a model close to home where this is happening is naïve.”