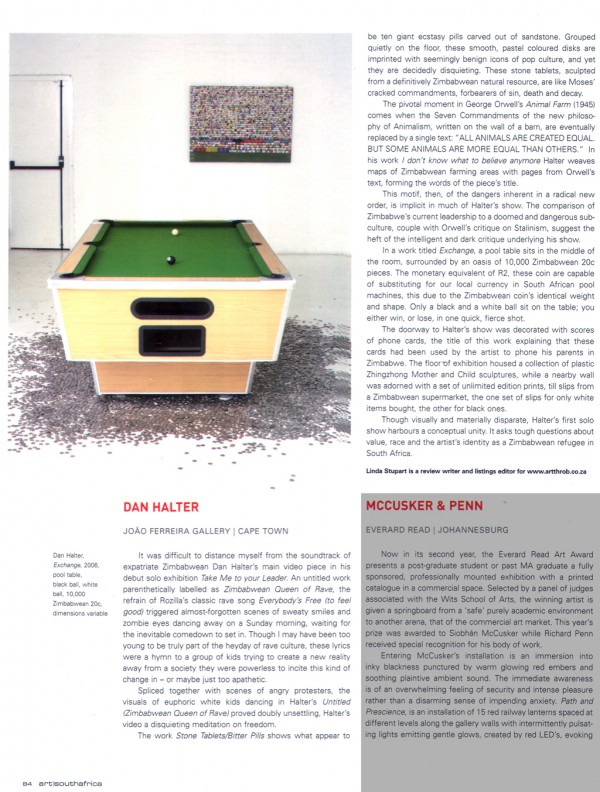 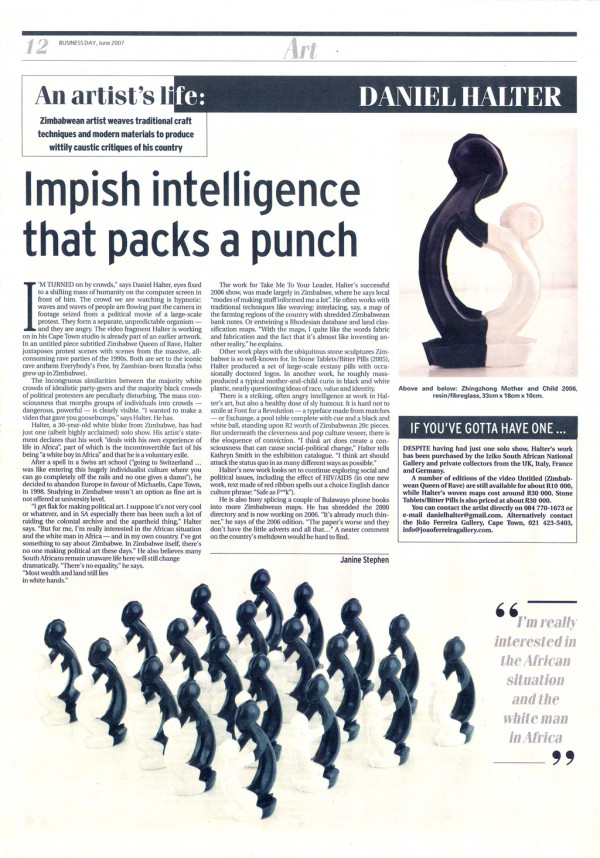 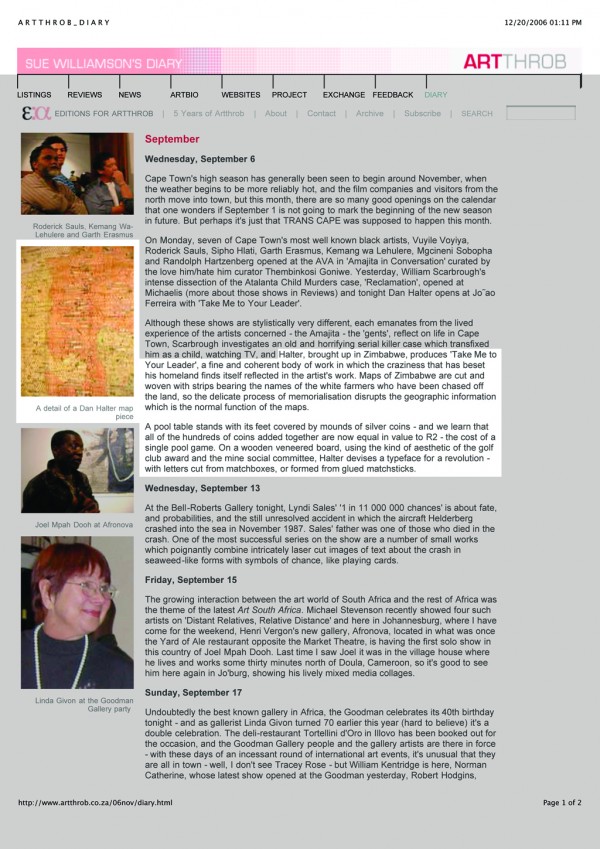 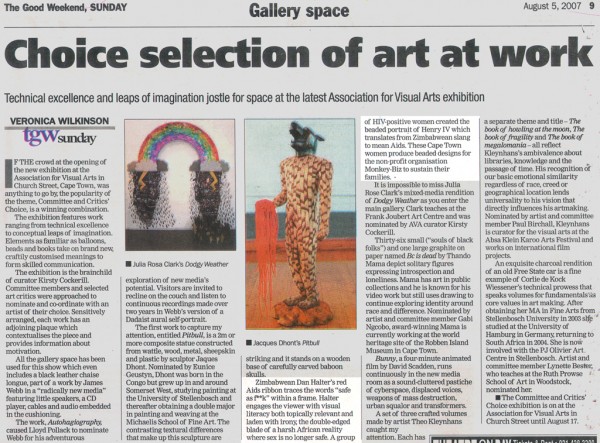 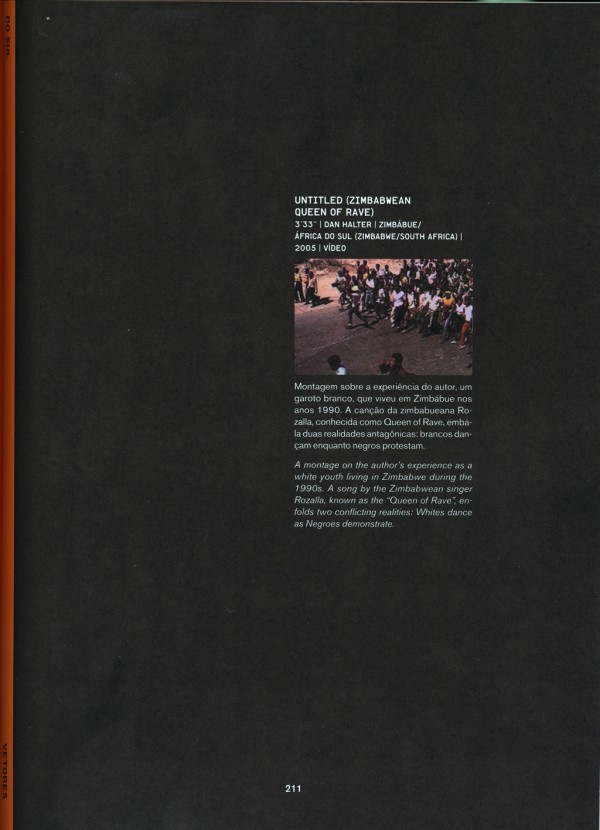 Daniel Halter’s work resonates with the kaleidoscopic logic of the bricoleur who dismantles the objects of culture only to re-assemble them so that out of the new relationships between their parts a pattern emerges, and hence a new object.

A book becomes a map; a map becomes a woven cloth; a popular saying becomes a political manifesto; stone becomes tablet; the word of God becomes a drug; a set of used phone cards are transformed into a doorway; blood becomes a ribbon and out of a flat wooden surface a small silver fish comes as a surprise. This process of taking apart is not merely destructive, for Halter’s process is akin to the labour of weaving, and as such unravelling the threads of culture, context and politics.

Halter comments on the political situation in Zimbabwe, but not unambiguously for the work also reflects Halter’s own uncomfortable outsider position as a white Zimbabwean now living in South Africa. Maps of Zimbabwe, one showing farming regions and the other land classification, are woven together with literary texts: George Orwell’s ‘Animal Farm’ and Joseph Conrad’s ‘Heart of Darkness’. Orwell’s allegory for the corruption of radical politics echoes Robert Mugabe’s transition from hero of Zimbabwe’s democratic struggle to dictator; while Conrad’s ambivalence towards the colonial project in the Belgian Congo mixed with his narrator’s own complicity reflect Halter’s own relationship to a home he has had to leave. Further destabilizing what was a geographical location on a map, now become cloth woven through with text, are embroidered phrases such as ‘When days are dark friends are few’. The personal interweaves with the political and the meaning of ‘place’ and ‘identity’ become less certain.

Essential to his work is Halter’s process of collecting, listening and watching, a sensibility for the language of the street and the contradictory politics and economics of the popular. In the series, ‘Zhingzhong Mother and Child’, traditional figurines moulded out of black and white plastic are locked in a tense embrace that plays the Eastern symbol of ying-yang off against the African curio. With the edition unlimited, Halter makes a witty comment on the reduction of African culture to mass-produced kitsch for a tourist market. In another play on popular language and African craft, the artist has beaded a portrait of his royal highness, ‘Henry the Fourth’. The seemingly literal title is in fact a slang expression for ‘HIV’ in Zimbabwe. The work also reflects the high rate of HIV infection in South Africa, and perhaps the risk anywhere in the world.

Halter’s most recent work re-appropriates the plastic mesh bag that pervades markets, stations and cities throughout Africa. These woven bags are a reflection of the contradictions of the global economy, being mass produced in India and China, they were the new Louis Vuitton summer range. Depending on where you are on the continent, the bags can be called anything from ‘Bangladeshi Bags’ to ‘China Town Totes’ to ‘Ghana Must Go’. Halter’s process of embroidering onto the plastic weave is the reverse of Louis Vuitton’s new range of African ‘rip-off’s’, instead of removing he re-inscribes the bags, literally, with their cultural meaning in the African context: movement and trade. The word that comes to mind here is fabrication, referring to the process of making an object or alternately constructing an untruth, a fantasy, lie. For Halter the very material of culture is always already unravelling. 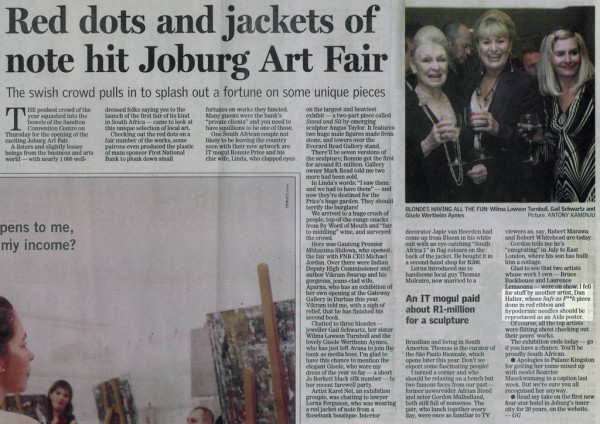