If you do not have patience you cannot make beer 2007 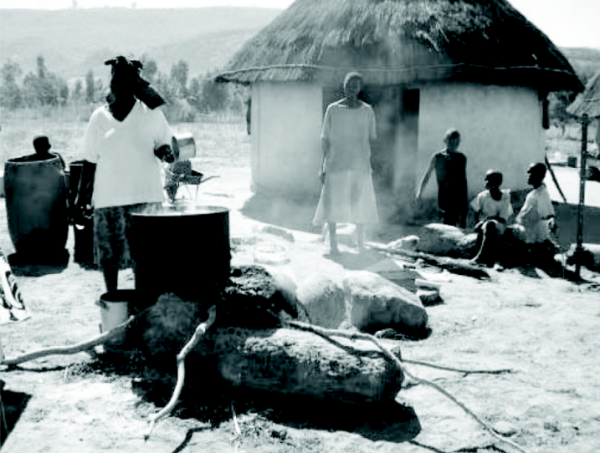 In rural Zimbabwe, fermented beverages are commonly prepared at home from locally grown grains. Traditionally, these homemade beers were produced for use during special cultural events such as weddings, funerals and spirit-appeasing ceremonies. At the present time, these beers are still used in traditional ceremonies, but they are sold to fellow community members as part of regular social gatherings as well. The commonest types of traditional beer were a seven-day beverage called doro rematanda, a by-product of this seven day beer called muchaiwa, and a one-day beverage called chikokiyana.1

The happiest days were those when she arrived home to a yeasty smell in the air and a large oil-drum bubbling away on a fire. This would mean her mother was making Seven Days, a homemade beer of maize and rapoko millet mixed with well water, so named because it took seven days to be ready.

Her mother’s beer was renowned in the village. On the first day of brewing, beer drinkers would pass by and give a long sniff then say, ‘Eh, eh, that smells good, I am looking forward to drinking this one.’ After a day of simmering, the drum would be left to cool in the hut for two days and on the fourth more rapoko added until the mixture was of porridge consistency. It was then repeatedly boiled and simmered to reduce it and more water added from the well. When the beer was ready it had thick froth which had to be poured off through a sieve.

On the seventh day if the beer drinkers did not automatically return to the hut, Aqui would climb an anthill or rock and shout, ‘Seven Day is ready!’ Her mother would then sit by the big drum, her wide skirt arranged around her considerable girth, and ladle out the lumpy yellow liquid with a cup hooked to a long stick.2

Things were changing in the village. You could see it in the beer. People did not want to wait for seven days anymore. They started thinking, you can’t brew beer for seven days, so they would mix yeast, sugar, millet, maize, anything they could find, even car battery fluid, and ferment it just for 24 hours. They called it One Day and it was dangerous.3

“Skokiaan” is a popular tune originally written by Zimbabwean musician August Musarurwa (d.1968) (usually identified as August Msarurgwa on record labels) in the tsaba-tsaba big band style that succeeded marabi. Skokiaan (Chikokiyana in Shona) refers to an illegal self-brewed alcoholic beverage typically brewed over one day that may contain a dangerous ingredient, such as methylated spirits. Variations on the tune’s title include Sikokiyana, Skokiana, and Skokian.4

It has been recorded by the likes of Louis Armstrong and Cat Stevens and countless others.

If you do not have patience you cannot make beer

In the artist’s absence the curators of the show THE INCHOATE IDIOSYNCRATIC DESCENT INTO NIHLISM undertake to brew One Day Beer in time for the opening of the exhibition. The artist will provide instructions (below), ingredients and a suitable receptacle. A Louis Armstrong version of the song “Skokiaan” will also be provided by the artist as an mp3. The curators will find a suitable device for playing the song “Skokiaan” on a loop at a reasonable volume close to the beer installation. In the spirit of Rirkrit Tiravanija the beer should be shared among the visitors creating a relational aesthetic. The curators are responsible for documenting the occasion as they see fit.

First bring about eight cups of water to a boil. Meanwhile, in a small bowl, mix together four wooden spoonfuls of mealie meal (the finely ground cornmeal used to make sadza / pap) with some water to make a thin gruel. Stir, breaking up any lumps, and then pour the paste into the boiling water. Stir again, partially cover, turn the heat down to medium-high, and keep the pot at a low boil for 15 minutes.

Let the gruel cool for about five minutes, and then add another four cups or so of cold water. Stir once again to break up any lumps. In a small bowl, mix together 1⁄2 cup raw sugar, 1⁄2 cup active dry yeast and 11⁄2 cups chimera (fermented ground millet, or zviyo). Add to the mix and stir. Cover, and let sit in a warm place overnight.

Twenty-four hours later, remove the cover and watch the beer’s effervescent bubbles sputter and pop. Give the brew a stir. The resulting brew is gritty, sour and yeasty – an acquired taste.5 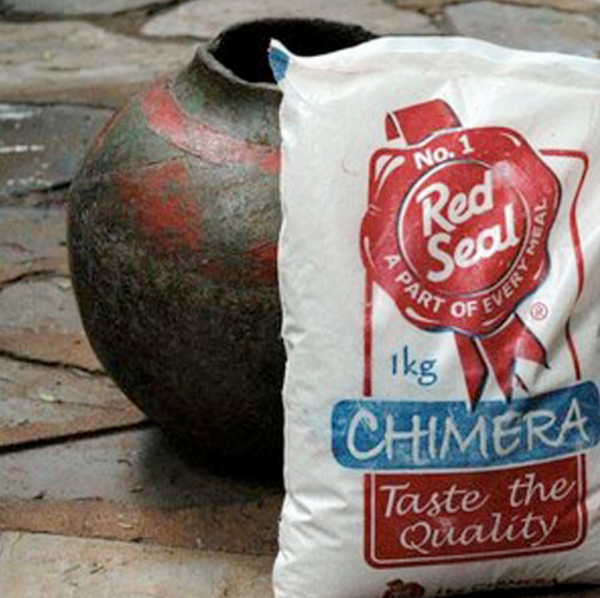