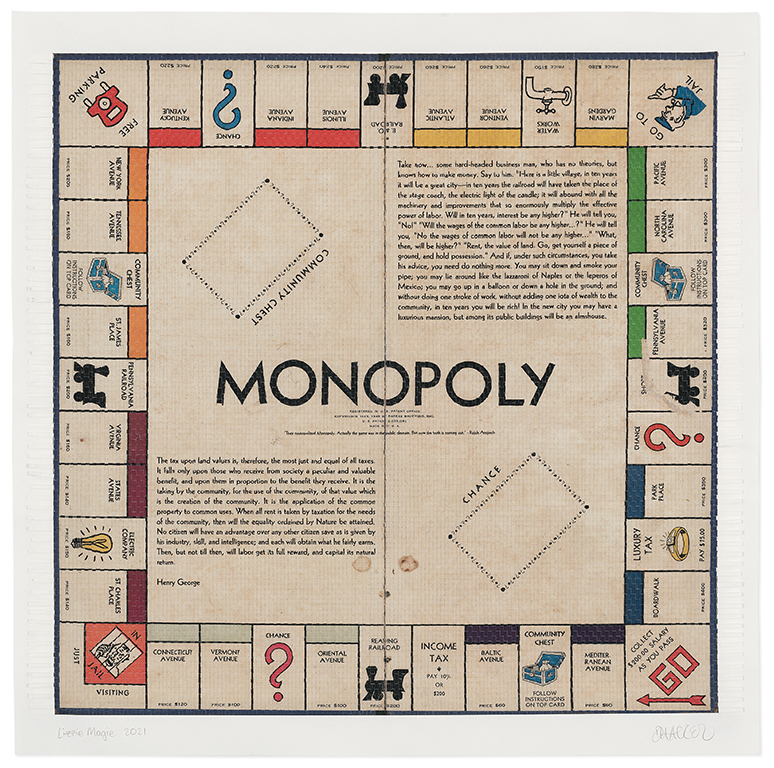 The prototype for the board game Monopoly was Lizzie Magie’s Landlord’s Game. Magie was a keen supporter of Henry George’s idea that taxing land instead of wages would lead to a more equal society. His proposed Land Value Tax inspired her to create the game as a means of showing how unfair land-ownership can be. Later Charles Darrow passed off the idea for the game Monopoly as his own when he sold the concept to the Parker Brothers in 1935. This fact was only brought to light in the 1970s when Ralph Anspach was sued by Parker Brothers for his game Anti-Monopoly which caused him to dig into the history of the game and rescue Lizzie Magie’s name from obscurity.

The text I added onto a vintage American Monopoly board (the original Atlantic City version) is as follows; it starts with a quote by Henry George:

Take now… some hard-headed business man, who has no theories, but knows how to make money. Say to him: “Here is a little village; in ten years it will be a great city—in ten years the railroad will have taken the place of the stage coach, the electric light of the candle; it will abound with all the machinery and improvements that so enormously multiply the effective power of labor. Will in ten years, interest be any higher?” He will tell you, “No!” “Will the wages of the common labor be any higher…?” He will tell you, “No the wages of common labor will not be any higher…” “What, then, will be higher?” “Rent, the value of land. Go, get yourself a piece of ground, and hold possession.” And if, under such circumstances, you take his advice, you need do nothing more. You may sit down and smoke your pipe; you may lie around like the lazzaroni of Naples or the leperos of Mexico; you may go up in a balloon or down a hole in the ground; and without doing one stroke of work, without adding one iota of wealth to the community, in ten years you will be rich! In the new city you may have a luxurious mansion, but among its public buildings will be an almshouse.

‘They monopolized Monopoly. Actually the game was in the public domain. But now the truth is coming out.’ – Ralph Anspach

The tax upon land values is, therefore, the most just and equal of all taxes. It falls only upon those who receive from society a peculiar and valuable benefit, and upon them in proportion to the benefit they receive. It is the taking by the community, for the use of the community, of that value which is the creation of the community. It is the application of the common property to common uses. When all rent is taken by taxation for the needs of the community, then will the equality ordained by Nature be attained. No citizen will have an advantage over any other citizen save as is given by his industry, skill, and intelligence; and each will obtain what he fairly earns. Then, but not till then, will labor get its full reward, and capital its natural return.