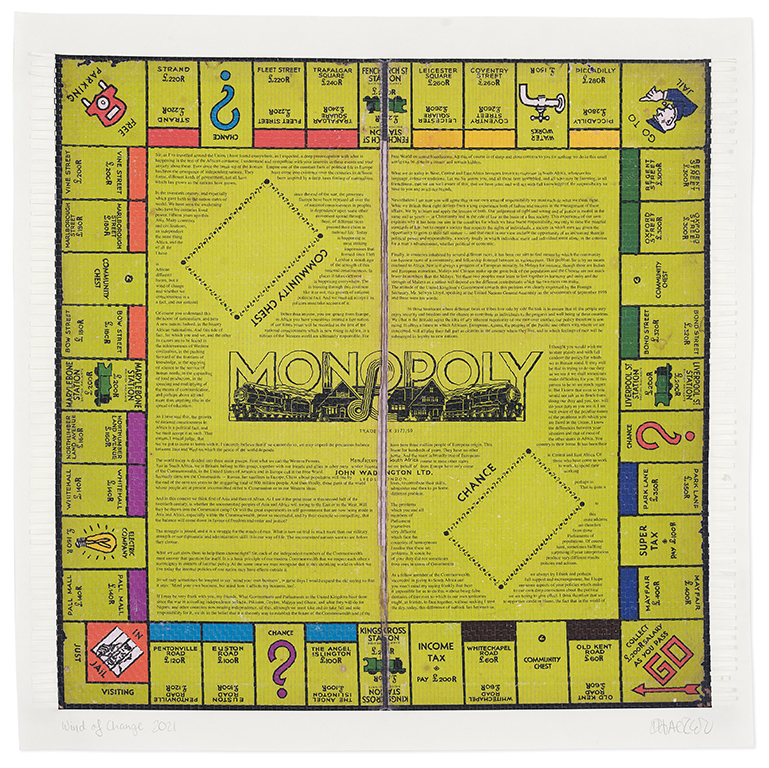 The ‘Wind of Change’ was a speech made by British Prime Minister Harold Macmillan in Cape Town in 1960. In it he warns South Africa that its apartheid policies no longer align with the new idea of allowing majority rule in England’s former colonies. The speech takes its name from the quote:

‘The wind of change is blowing through this continent. Whether we like it or not, this growth of national consciousness is a political fact.’

This content came as a shock to the South African Prime Minister Hendrik Verwoerd who responded by saying that white people also had rights and that Africa was now their only home too. The speech did nothing to change South Africa’s apartheid policies, if anything it served to entrench them further.

The text I added onto a vintage South African-made Monopoly board (with the old London locations) is an excerpt from the speech. It reads:

Sir, as I‘ve travelled around the Union I have found everywhere, as I expected, a deep preoccupation with what is happening in the rest of the African continent. I understand and sympathise with your interests in these events and your anxiety about them. Ever since the break-up of the Roman Empire one of the constant facts of political life in Europe has been the emergence of independent nations. They have come into existence over the centuries in different forms, different kinds of government, but all have been inspired by a deep, keen feeling of nationalism, which has grown as the nations have grown.

In the twentieth century, and especially since the end of the war, the processes which gave birth to the nation states of Europe have been repeated all over the world. We have seen the awakening of national consciousness in peoples who have for centuries lived in dependence upon some other power. Fifteen years ago this movement spread through Asia. Many countries there, of different races and civilisations, pressed their claim to an independent national life. Today the same thing is happening in Africa, and the most striking of all the impressions that I have formed since I left London a month ago is of the strength of this African national consciousness. In different places it takes different forms, but it is happening everywhere. The wind of change is blowing through this continent and whether we like it or not, this growth of national consciousness is a political fact. And we must all accept it as a fact, and our national policies must take account of it.

Of course you understand this better than anyone, you are sprung from Europe, the home of nationalism, and here in Africa you have yourselves created a free nation. A new nation. Indeed, in the history of our times yours will be recorded as the first of the African nationalists. And this tide of national consciousness which is now rising in Africa, is a fact, for which you and we, and the other nations of the Western world are ultimately responsible. For its causes are to be found in the achievements of Western civilisation, in the pushing forward of the frontiers of knowledge, in the applying of science to the service of human needs, in the expanding of food production, in the speeding and multiplying of the means of communication, and perhaps above all and more than anything else in the spread of education.

As I have said this, the growth of national consciousness in Africa is a political fact, and we must accept it as such. That means, I would judge, that we‘ve got to come to terms with it. I sincerely believe that if we cannot do so, we may imperil the precarious balance between East and West on which the peace of the world depends.

The world today is divided into three main groups. First what we call the Western Powers.

You in South Africa, we in Britain, belong to this group, together with our friends and allies in other parts of the Commonwealth, in the United States of America and in Europe call it the Free World.

Secondly there are the Communists — Russia, her satellites in Europe, China whose population will rise by the end of the next ten years to the staggering total of 800 million people. And then thirdly, those parts of the world whose people are at present uncommitted either to Communism or to our Western ideas.

And in this context we think first of Asia and then of Africa. As I see it the great issue in this second half of the twentieth century, is whether the uncommitted peoples of Asia and Africa will swing to the East or to the West. Will they be drawn into the Communist camp? Or will the great experiments in self-government that are now being made in Asia and Africa, especially within the Commonwealth, prove so successful, and by their example so compelling, that the balance will come down in favour of freedom and order and justice?

The struggle is joined, and it is a struggle for the minds of men. What is now on trial is much more than our military strength or our diplomatic and administrative skill. It is our way of life. The uncommitted nations want to see before they choose.

What we can show them to help them choose right? Sir, each of the independent members of the Commonwealth must answer that question for itself. It is a basic principle of our modern Commonwealth that we respect each other‘s sovereignty in matters of internal policy. At the same time we must recognise that in this shrinking world in which we live today the internal policies of one nation may have effects outside it.

If I may be very frank with you, my friends. What Governments and Parliaments in the United Kingdom have done since the war in according independence to India, Pakistan, Ceylon, Malaya and Ghana, and what they will do for Nigeria and other countries now nearing independence, all this, although we must take and do take full and sole responsibility for it, we do in the belief that it is the only way to establish the future of the Commonwealth and of the Free World on sound foundations. All this of course is of deep and close concern to you for nothing we do in this small world can be done in a corner and remain hidden.

What we do today in West, Central and East Africa becomes known to everyone in South Africa, whatever his language, colour or traditions. Let me Sir assure you, and all those here assembled, and all who may be listening, in all friendliness, that we are well aware of this, that we have acted and will act with full knowledge of the responsibility we have to you and to all our friends.

Nevertheless I am sure you will agree that in our own areas of responsibility we must each do what we think right. What we British think right derives from a long experience both of failure and success in the management of these affairs. We try to learn and apply the lessons of both. Our judgement of right and wrong and of justice is rooted in the same soil as yours — in Christianity and in the rule of law as the basis of a free society. This experience of our own explains why it has been our aim in the countries for which we have borne responsibility, not only to raise the material standards of life, but to create a society that respects the rights of individuals, a society in which men are given the opportunity to grow to their full stature — and that must in our view include the opportunity of an increasing share in political power and responsibility, a society finally in which individual merit and individual merit alone, is the criterion for a man‘s advancement, whether political or economic.

Finally, in countries inhabited by several different races, it has been our aim to find means by which the community can become more of a community, and fellowship fostered between its various parts. This problem Sir is by no means confined to Africa. Nor is it always a problem of a European minority. In Malaya for instance, though there are Indian and European minorities, Malays and Chinese make up the great bulk of the population and the Chinese are not much fewer in numbers than the Malays. Yet these two peoples must learn to live together in harmony and unity and the strength of Malaya as a nation will depend on the different contributions which the two races can make. The attitude of the United Kingdom‘s Government towards this problem was clearly expressed by the Foreign Secretary, Mr. Selwyn Lloyd, speaking at the United Nations General Assembly on the seventeenth of September 1959 and these were his words:

In those territories where different races or tribes live side by side the task is to ensure that all the people may enjoy security and freedom and the chance to contribute as individuals to the progress and well being of these countries. We (that is the British) reject the idea of any inherent superiority of one race over another, our policy therefore is non-racial. It offers a future in which Africans, Europeans, Asians, the peoples of the Pacific and others with whom we are concerned, will all play their full part as citizens in the country where they live, and in which feelings of race will be submerged in loyalty to new nations.

I thought you would wish me to state plainly and with full candour the policy for which we in Britain stand. It may well be that in trying to do our duty as we see it we shall sometimes make difficulties for you. If this proves to be so we much regret it. But I know that even so you would not ask us to flinch from doing our duty and you, too, will do your duty as you see it. I am well aware of the peculiar nature of the problems with which you are faced in the Union, I know the differences between your situation and that of most of the other states in Africa. You have here three million people of European origin. This country is their home. It has been their home for hundreds of years. They have no other home. And the same is broadly true of Europeans in Central and East Africa. Of course in most other states those who have come to work from Europe have only come to work, to spend their working lives, to contribute their skills, perhaps to administer and then to go home. That is quite a different problem.

The problems to which you and all members of this Parliament must address yourselves are therefore very different from those which face the Parliaments of countries of homogenous populations. Of course I realise that these are hard, sometimes baffling problems. It would be surprising if your interpretation of your duty did not sometimes produce very different results from ours in terms of Government policies and actions.

As a fellow member of the Commonwealth we always try I think and perhaps succeeded in giving to South Africa our full support and encouragement, but I hope you won‘t mind my saying frankly that there are some aspects of your policies which make it impossible for us to do this without being false to our own deep convictions about the political destinies of free men to which in our own territories we are trying to give effect. I think therefore that we ought, as friends, to face together, without seeking I trust to apportion credit or blame, the fact that in the world of the day, today, this difference of outlook lies between us.